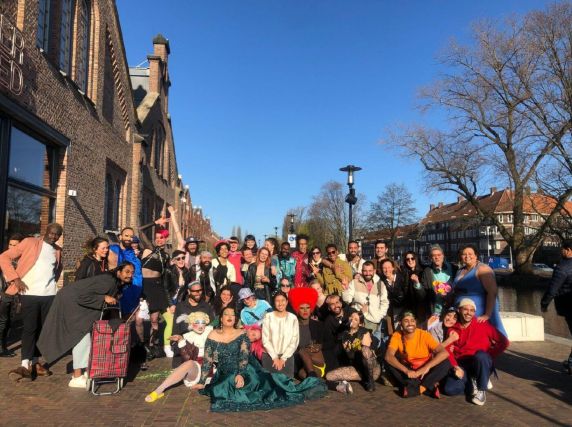 As the LIMBO series final presentation ends on the 8th of May, Framer Framed interviews the co-creators Fabian Holle, Noa Bawits and participating artist Ariya about their take on the experience.

by Emma Regeni, this interview has already been published on the website of FramerFramed.

LIMBO is a collaborative research project initiated by Fabian Holle from the Refugee Academy (VU Amsterdam), in collaboration with Framer Framed and queer/refugee/migrant community organisers and artists. The project aimed at creating meaningful knowledge on the challenges and resilience of queer refugees and the role of community engaged scholarship. LIMBO brought together a diverse group of queer participants with a refugee background for eight Sundays, where workshops were led with the goal of encouraging creative expression and the recollection of individual and collective memories. The series culminated an event open to the public, where some of the works produced during the workshops were presented alongside a programme of live performances. The presentation opened to the public on March 27 with an event organised in collaboration with the Sehaq Queer Refugees Group, and is on display until May 8, 2022 at Framer Framed. To read more about the event, click here. 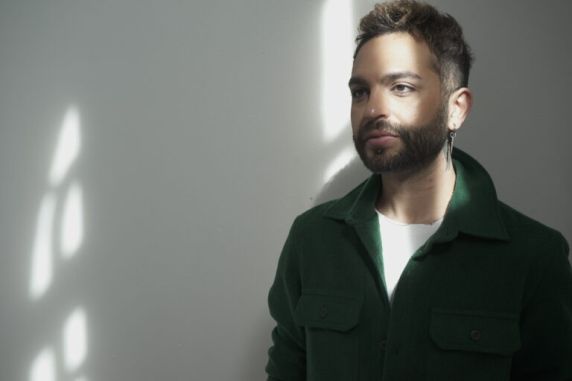 “True art is about the story, the story of the inner world of the artist.”

When entering the LIMBO space at Framer Framed, one immediately notices the large prints against the walls. They are the artworks of Ariya, who started his artistic practice about two years ago as a response to the forced immobility caused by the pandemic, combined with a whirlwind of emotions that, at the time, did not find a creative outlet. Ariya met Fabian at the beginning of 2020 through Fabian’s master thesis research, and was asked to create artworks for the online platform Art for Change. This sparked Ariya’s creativity and fuelled his artistic research. For Ariya, art is nothing but a healing process that allows the manifestation of the higher self, and although it is rooted in the artist’s individual journey, it speaks about human experience at large.

Ariya has been working as a graphic designer for years in Iran, before migrating to the Netherlands five years ago in search of the possibility of living in a more tolerant society. He has since then been confronted with a whole new type of struggle compared to that faced in his homeland: once in Europe, he has been faced with an unexpectedly judgmental society, sometimes reflected even within the LGBTQI+ community. Despite encouraging slogans to “be yourself”, so widespread within the liberal Western world, Ariya often noticed a lack of safety in public space for people with a migrant or queer background. This discomfort was not necessarily felt in terms of physical safety, but rather in the constant and not-so-subtle reminders that it is only completely safe to be oneself when this complies to the standards in place. Self-expression seems to be rather empty and rhetorical words, rather than a rule to actually live by and incorporate as a value.

As Ariya notices, the recurrent labeling of migrants as a disadvantaged and vulnerable category is a portrayal which ultimately puts migrants in the condition of being unable to get rid of labels altogether, to finally build a self-made, independent identity. LIMBO was a way for participants to fight the victimisation of queer refugees as a lacking, powerless minority, and to empower themselves by getting the possibility to create their own narrative, focusing on what they have to offer, rather than on what they have lost. Ariya’s works address this re-appropriation of agency, for they are a manifestation of self-acceptance as a visualisation of the feeling that naturally arises in the present moment: Resistance starts from one’s own dimension.

The stories shared by the participants throughout the LIMBO experience, says Ariya, are different yet related to each other; certain individual struggles are experienced collectively. Many participants voiced the fact that they found in the space and the community of LIMBO a home and a family, where to feel protected and finally be able to share their truths. Although he sometimes engages with text as well, words are not the preferred medium for Ariya, which is one of the reasons why he delved into visual art. Yet, for Ariya the workshops offered by LIMBO have been inspiring even when they did not deal with the medium preferred by the artist as, by combining depth with playfulness, they challenged each participant to explore new creative and expressive modalities.

Making art helped Ariya to find courage to find a safe space within, and to feel the confidence to find validation of one’s reality not on the outer world anymore, but within oneself. This empowering process of visualisation of one’s creative source is necessary for him to export what is inside to the outside, in the form of art.

Educational Officer at Framer Framed and co-creator of LIMBO 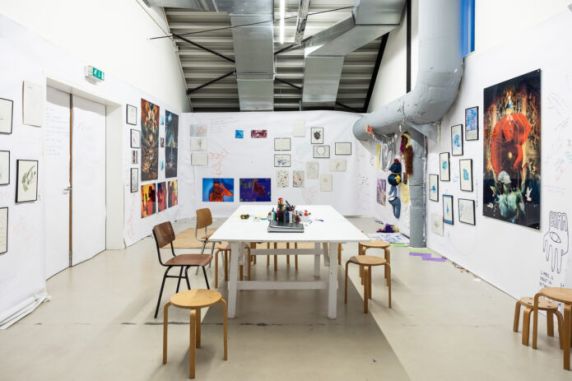 The LIMBO series found a space as a result of Noa’s intuition that Framer Framed, where she works as an educational officer, would be the ideal context for her and Fabian’s research to take place. The collaboration between Noa and Fabian came into being through the Vrije Universiteit Amsterdam, where they are both involved in the Sociology department, Fabian as a PhD candidate and Noa as a Master student. When Noa noticed that many points, touched upon by Fabian’s research, were aligned with the topics dealt with at Framer Framed, the natural overlap resulted in an organic collaboration.

Noa’s involvement in LIMBO is directed at investigating the possibilities of decolonial collaboration between queer refugees and art institutions. Her enthusiasm about the opportunity of a mutually beneficial partnership between communities and institutions is what drove her toward ideas of community engaged scholarship, and her twofold role in the project as both researching within an institution while also being representative of that same institution, is what made her process exceptionally delicate in terms of positioning, ethics and rules of conduct.

Noa sees LIMBO as an intersection between a grassroots initiative and an institutional one, which is a tension that Framer Framed has been confronted with since its beginnings. She is convinced that the contradiction present within contemporary art institutions attempting to act a critique of curatorial practices can indeed find constructive and coherent outcomes. LIMBO can be seen as addressing exactly this gap, proving that institutions can maintain themselves critical and give some of the power allocated by major stakeholders back to the community.

Noa admits that, even though as a woman of color she was already aware of the role played by safety in everyday interactions, she underestimated the extent to which refugees would experience this issue, and the emotional load that would unfold when given a space to express it. Suddenly facing the lack of an adequate formal structure to support migrants on a psychological level, Noa and Fabian were invested with the magnitude of how necessary a safer space is for vulnerable categories. Although challenging, Noa believes that this did not inhibit her from wanting to create a safer space. Rather, she became aware of the importance of learning from, and collaborating with, professionals who have worked with creating safer spaces for years.

What the experience of LIMBO has taught Noa is that this circular relationship must be explored further, and that perhaps any attempt to equally distribute power must entail the marginalised party leading the process, as well as staying open towards the possibility of letting go of control in the process and finding new configurations.

Researcher and co-creator of LIMBO

Along with co-creator Noa Bawits, Fabian Holle conceived LIMBO as part of their PhD research about the role of art in queer refugees’ lives in the Netherlands, which itself is the continuation of their master project, supervised by mentor Halleh Ghorashi and Maria Rast, with which he graduated from the Vrije Universiteit Amsterdam and was awarded with the ARC-GS Master Thesis Prize.

Beside their academic background, Fabian has had years of hands-on experience with creating a safe space for queer communities; they have engaged with drag, acting, performance and contributed to create a framework for the uprising queer community in Rotterdam to establish cultural events, which informed their own research about themes of trust, community and accessibility.

Fabian highlights safety as a key element guiding the whole process of creating the framework of LIMBO. Safety as an absolute value is ever impossible to promise someone entering a space; what is comfortable for someone is not necessarily comfortable for someone else, feelings of safety vary from individual to individual and may shift over time. Therefore, Fabian proposes to think of LIMBO as a Safer space, a space that strives to be safer than spaces participants usually find themselves in, and where the intention is to create a context where consent, communication and democratic decision-making are emphasised. In this spirit, the initiators gathered members of the queer migrant community to lead workshops consisting of different activities that used story creation, drawing, poetry but also consent practices derived from BDSM bondage as creative tools.

Having previously worked with queer, gender nonconforming communities, often of color, Fabian is sensible about the moral aspects of doing engaged research and of the necessity to not view participants merely as objects that hand over stories. The collaboration between researcher and participants must be active, informed and conscious, and research should be established as a cooperative effort that is mutually beneficial in terms of both knowledge and resources for everyone involved – the researchers and the institutions, but also the participants of the project and the audience.

Fabian also stresses the importance of accessibility to academic research not only to a chosen elite of academics, but to potentially everyone. It’s out of this spirit that the co-creators Fabian and Noa conceived the exhibition as a culmination of the activities of LIMBO, as a way to produce an output to the project that welcomes the public to engage with it, regardless of one’s background. A process-oriented focus has been a constant along the research, which does not concern itself with art per se, but rather looks toward togetherness, inclusivity and community that creative processes can foster. Academic research does not have to speak in exclusive terms, but can transfer knowledge to the public through other languages and ultimately aim for accessibility without losing in-depth content. 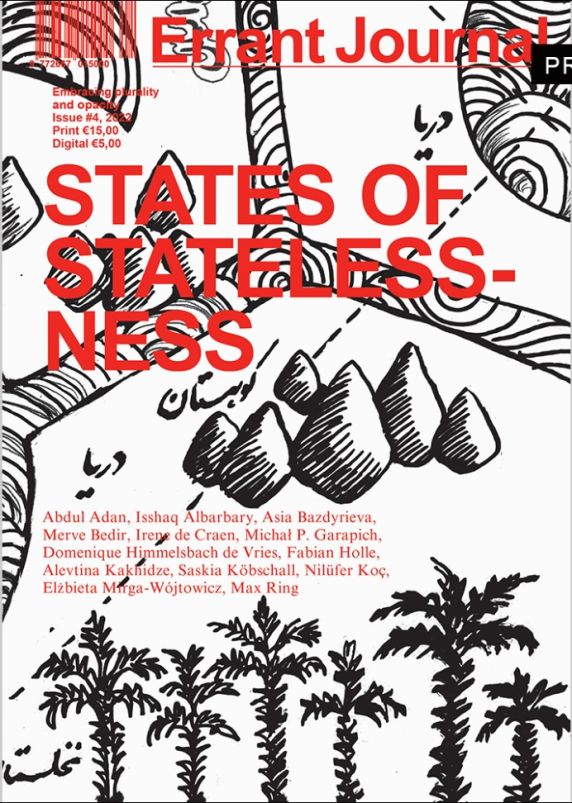 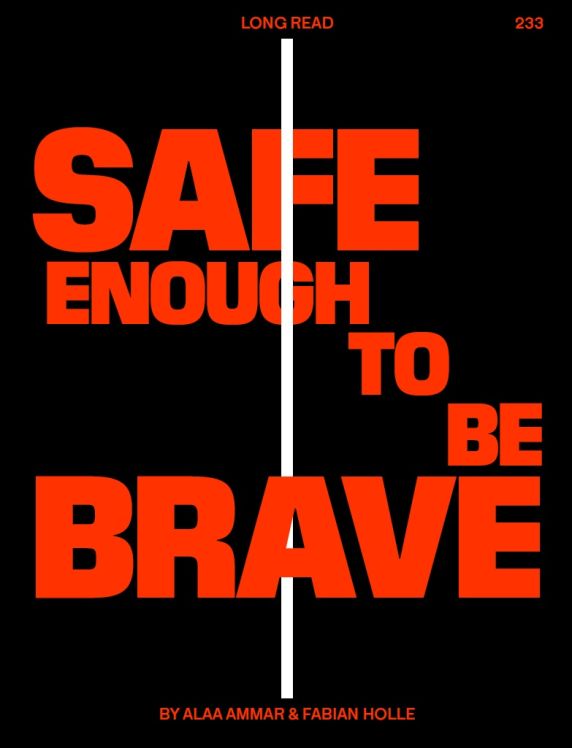 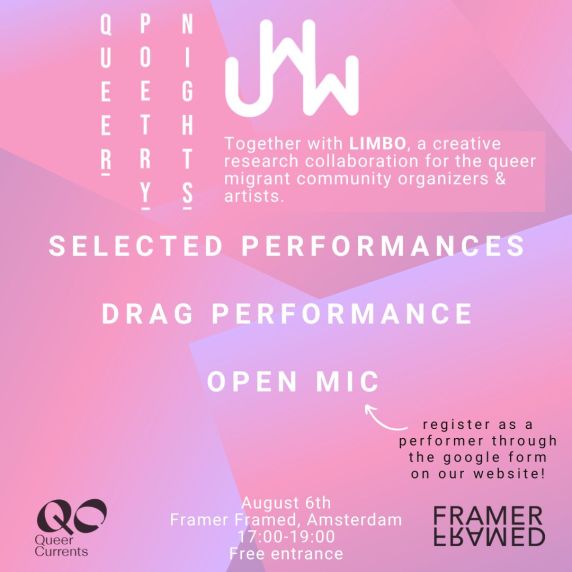 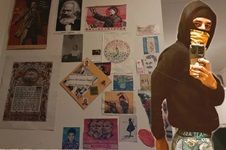