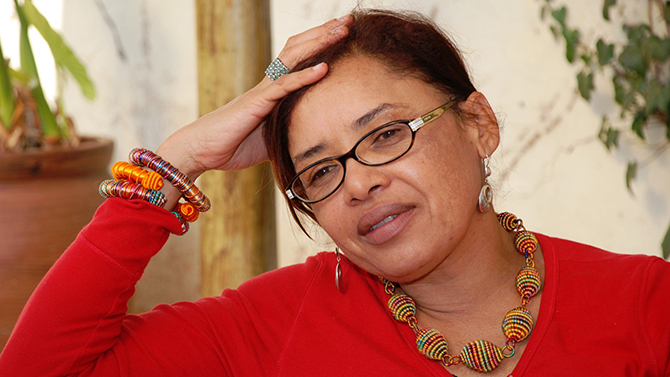 Salo’s legacy is a feminist approach to power relations implicit in the research process. Her work includes a humbler understanding of methodology as a path to “recuperates and celebrates marginalised knowledges” (p.102) in the African continent.

In the intersection between feminism and African diversity, Elaine Salo (1962-2016) offers substantive reflections on how to engage with the lived experiences of the African continent in a critical and ethical manner. This particular article focuses on a methodological intervention that acknowledge how “in our insistence on prioritising Pan-Africanist solidarity, and in our search for African authenticity, we have often represented African social realities as undifferentiated, homogeneous generalities” (p. 93). To encourage a methodology that engages with differences and diversity, Salo adds a “feminist epistemological call to reflect upon the power relations that inhere in the research process and the importance of positionality recognises that the production of knowledge is always partial and situated’ (p. 96). This perspective of feminist epistemologies considers the imbalanced power relation between the ‘North’ and the ‘South’ in which African societies and individuals are often simplified, homogenized and stereotyped as ‘less developed’. By stressing ‘the contingent, partial and mutually constituted nature of knowledge production’ (ibid.), Salo urges for “a more complex and transdisciplinary methodological approach” (p.102) that seriously considers and respects the diversity of African subjectivities. Her work is directly linked to the methodological choices in this project, specifically for in the context of South Africa. In a country with deep legacies of segregation, Salo’s work offers a critical stand to rethink the approach we take when collaborating with forced migrant communities from different African countries.