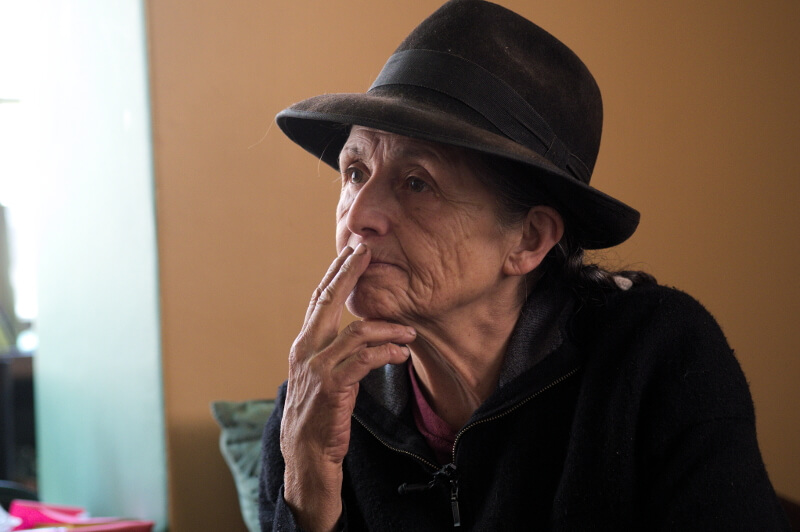 Cusicanqui´s work and practices are an example of how decolonization must go beyond a theoretical proposition, but it should also be embodied, individually and collectively, as a constant struggle for justice and freedom.

Cusicanqui is a Bolivian sociologist with a long trajectory in the decolonization of the Andes. One of her main focuses has been the process of mestizaje – the encounter of the European and the indigenous- as a colonial product that has been widely and strongly adapted to the creation of nation-states. In the process of citizenship in many countries in the Americas, mestizaje is understood as a total fusion that creates a new ‘race-culture’ in which whiteness is the standard. In respond to this whitening process, Cusicanqui introduces the mestizaje Ch’ixi, an Aimara concept that captures the constant struggle between the colonial and the colonized but without aiming for a total fusion, synthesis or hybridization. In comparison to mestizaje as a colonial process, mestizaje ch’ixi stands as an effort to recognize the duality or plurality of both European and indigenous ancestry as two cultures that co-existence, antagonize and complement each other, without fusion. By getting immerse in these constant tensions, mestizaje Ch’ixi is a practice of decolonization that “departs from the recognition of us as bilinguals, ‘spotty’ and ch’ixi which is part of our culture, theories, epistemologies, national politics as well as our own definition of well-being and ‘development’” (p. 73). This reinterpretation of mestizaje has been a great source of inspiration to approach my Mexican background and the discourse of mestizaje that frames my own identity. This theories, along her praxis in Bolivia, are a source of inspiration to pursue a decolonial theorizing that starts with practicing the decolonization of my own being. Furthermore, her work is used in this project as a source of inspiration to seek a critical stand on decolonisation as a process towards justice that should be reflected in our daily actions and decisions as researchers. As scholars based in the Global North, Cusicanqui’s work remind us of the importance to be critical and encourage South-South dialogues, for instance between Latin America and South Africa.