Art for Change - The Voice of the Queer (By Sadiqa)

Fabian: I'm wondering what challenges you have in this pandemic, in social distancing generally?

Sadiqa: Yeah, I think I have a lot of challenges. The top challenge would be not being able to see my queer friends. Also not being able to go to the gym, because that really helps me to refresh my ideas. Further, working from home and having motivation to just continue as if nothing is going on in the world was the biggest challenge for me. And lately, what happened in Morocco, the outing campaign of people. My soul and brain are still in Morocco. So it feels as if I’m living it, as if I was also there. Seeing that is like a flashback all over again.

Fabian: Because the Queer Moroccan Revolution is like an online action right? Could you tell me about that?

Sadiqa: So there was this huge wave of outing LGBT people in Morocco. People created fake profiles on Grindr and took pictures of the queer people there on GayRomeo and Facebook and all of that. They put these pictures on pages outing people that they are queer. And people faced a lot of problems because they were stuck with their families. It was not the first time that we faced a backlash in Morocco for the queer community. But it was definitely a time where the amount of people that talked about it was huge. So we said, we will take this opportunity and we turn it around and make it our revolution. We will take the opportunity and go forward with it. So we created a work group that we called Queer Revolution Morocco. And the main thing is to take as much space as we could and show our revolution with art, with communication and with the press. Because there were a lot of people that took this opportunity to talk on our behalf. So we're like, no, we are going to talk with our own voices. We also have a voice. Each one of us has a voice and we can talk.

Fabian: And who were the people taking the opportunity to talk?

Sadiqa: Human rights defenders in Morocco. We have a lot of problems with them because they are not very inclusive. But they still want to take advantage of the light that is now on the LGBT movement.

Fabian: Do they identify as LGBT?

Sadiqa: No, no, no. So the main two ways were showing arts as well as showing our own voices. We haven’t decided if we will be a collective or a movement or whatever, but it was very successful and we were able to get our point across and it’s still ongoing.

Fabian: And how does it work with the art works? Do you invite people to make something or what is the idea?

Sadiqa: So the idea is that we gather the arts in one platform and use hashtags to do it, to be able to access the arts that people are making. (#انتفاضة_اللوابا_المغرب, #Queer_revolution_Morocco, #Révolution_Queers_Maroc,). So every person is asked to show their support or show their revolution through art. It was singing, it was makeup art, drag, writing, all different forms of art. Anyone that can show their queer revolution was able to share it. And we just wanted to share it all over .

Fabian: And if you say ‘show your own revolution’, what do you actually mean with that?

Fabian: So you actually mean like a real revolution in Morocco to ban the old way of thinking?

Sadiqa: Yeah. And we are not only talking about queers, but also sex workers, women, about all the people who are oppressed with laws and oppressive mechanisms in Morocco.

Fabian: How do you deal with these challenges in physical distancing? This revolutionary project is already a big part of how you deal with it. But could you tell what your strategies are?

Sadiqa: Yeah, so I have less work to do. So I picked up old stuff that I always wanted to do, especially art related stuff. There were these songs that I wanted to learn to play on the guitar. I started doing that and I wrote a rap song. So I'm also learning how to do that technically.

Fabian: Do you have any idea or sort of a vision of the world after this pandemic? What do you think?

Sadiqa: I want people to reflect on this afterwards. Not just to jump back because we all miss our old lives. We can take time to know how our old lives were actually not that solid. A virus has changed our perception of things while we were not prepared. So what I would like to happen is that we keep reflecting on this and create alternative ways to keep connecting with each other. To just keep this going. I want it to be a learning experience. And we don't jump back to our old lives and forget about it.

The image below displays an (English) translation of the lyrics of the song "The Voice of the Queer", by Sadiqa: 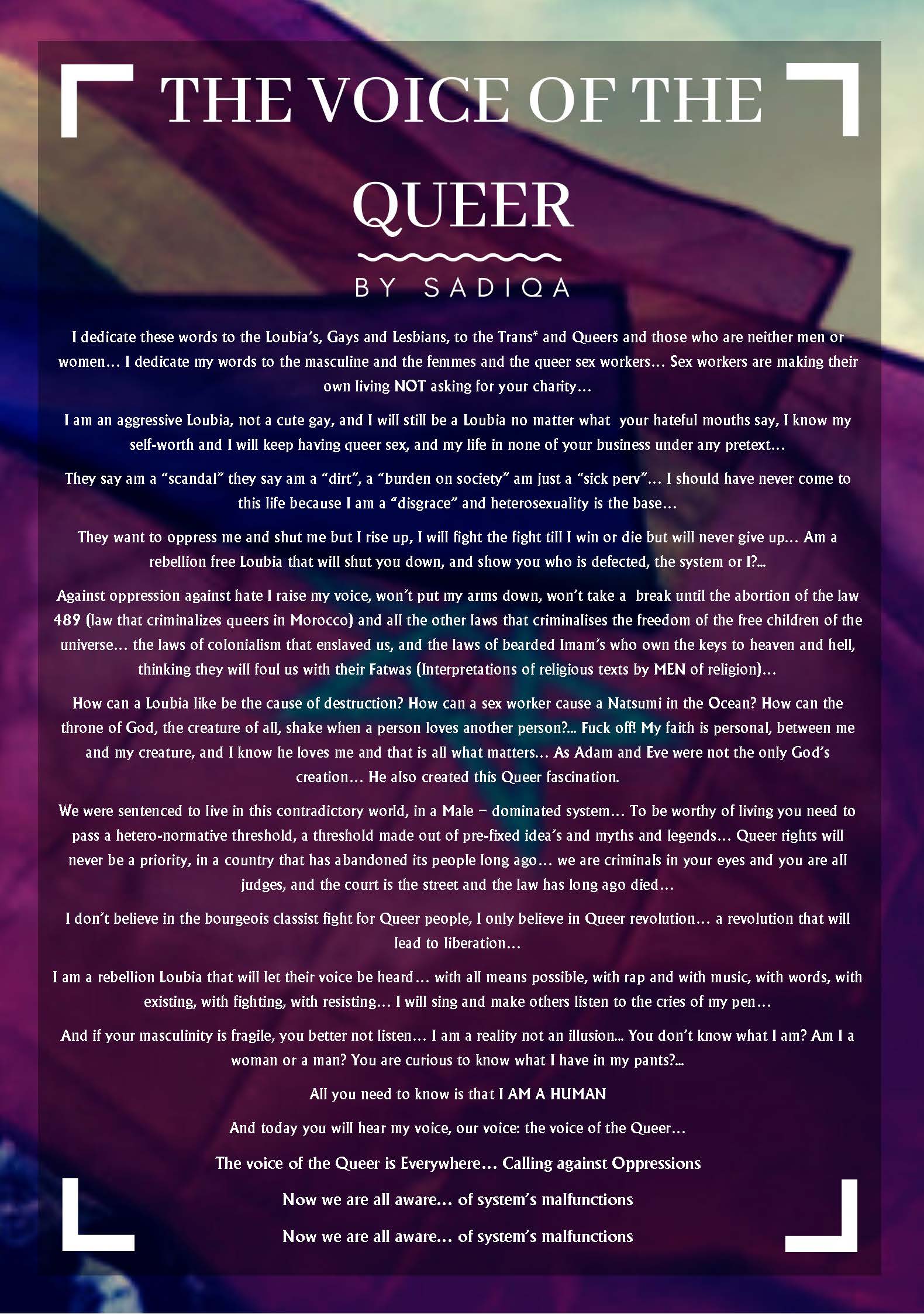 The Voice of the Queer - By Sadiqa

I dedicate these words to the Loubia’s, Gays and Lesbians, to the Trans* and Queers and those who are neither men or women… I dedicate my words to the masculine and the femmes and the queer sex workers… Sex workers are making their own living NOT asking for your charity…

I am an aggressive Loubia, not a cute gay, and I will still be a Loubia no matter what your hateful mouths say, I know my self-worth and I will keep having queer sex, and my life in none of your business under any pretext…

They say am a “scandal” they say am a “dirt”, a “burden on society” am just a “sick perv”… I should have never come to this life because I am a “disgrace” and heterosexuality is the base…

They want to oppress me and shut me but I rise up, I will fight the fight till I win or die but will never give up… Am a rebellion free Loubia that will shut you down, and show you who is defected, the system or I?...

Against oppression against hate I raise my voice, won’t put my arms down, won’t take a break until the abortion of the law 489 (law that criminalizes queers in Morocco) and all the other laws that criminalises the freedom of the free children of the universe… the laws of colonialism that enslaved us, and the laws of bearded Imam’s who own the keys to heaven and hell, thinking they will foul us with their Fatwas (Interpretations of religious texts by MEN of religion)…

How can a Loubia like be the cause of destruction? How can a sex worker cause a Natsumi in the Ocean? How can the throne of God, the creature of all, shake when a person loves another person?... Fuck off! My faith is personal, between me and my creature, and I know he loves me and that is all what matters… As Adam and Eve were not the only God’s creation… He also created this Queer fascination.

We were sentenced to live in this contradictory world, in a Male – dominated system… To be worthy of living you need to pass a hetero-normative threshold, a threshold made out of pre-fixed idea’s and myths and legends… Queer rights will never be a priority, in a country that has abandoned its people long ago… we are criminals in your eyes and you are all judges, and the court is the street and the law has long ago died…

I don’t believe in the bourgeois classist fight for Queer people, I only believe in Queer revolution… a revolution that will lead to liberation…

I am a rebellion Loubia that will let their voice be heard… with all means possible, with rap and with music, with words, with existing, with fighting, with resisting… I will sing and make others listen to the cries of my pen…

And if your masculinity is fragile, you better not listen… I am a reality not an illusion... You don’t know what I am? Am I a woman or a man? You are curious to know what I have in my pants?...

All you need to know is that I AM A HUMAN

And today you will hear my voice, our voice: the voice of the Queer…

The voice of the Queer is Everywhere… Calling against Oppressions