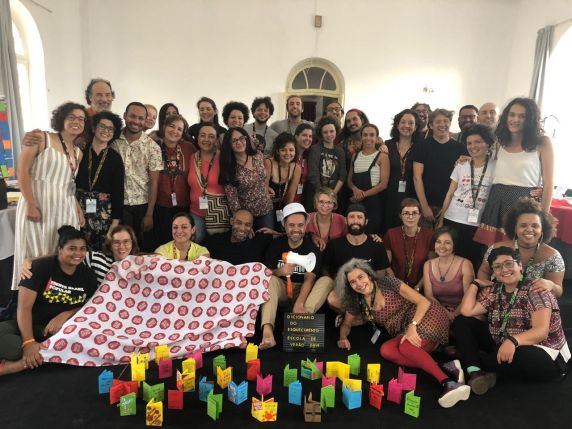 Corazonar: co-creation with a heart

Last July I had the opportunity to participate in the summer school Epistemologies of the South organized by the Center of Social Sciences of the University of Coimbra. During lectures and creative workshops, I met forty scholars, activists and artists from around the world in a dynamic and vibrant week of (self)learning.

Developed by Boaventura de Sousa Santos and Maria Paula Meneses, the Epistemologies of the South are both a political and an epistemological proposal that recognizes that along the oppressive practices of colonialism, patriarchy and capitalism, there has been epistemological oppression. Therefore, it argues that social justice cannot be truly achieved without epistemic justice. This means that diverse forms of understanding and experiences should be recognized. Moreover, they should enter into dialogue with each other, including the perspective from the West, without aiming to create a hierarchy.

Within the multiple layers and angles of this proposal, a concept expressed by professor Santos was corazonar (Arias, 2012; Santos, 2018), a wordplay between the Spanish words think (pensar), heart (corazón) and hunch (corazonada), and thus can be translated as ‘thinking with the heart’. Originally coined by Gustavo Esteva, and deeply connected with the idea of sentipensar (feeling-thinking) coined by Orlando Fals Borda, it is present in several indigenous and Afro-descendent communities in the Americas, corazonar connects the intellectual labor proper of academia with emotions, such as bravery and empathy, that motivate the researcher to address injustice. From this perspective, emotions do not involve a lack of control or direction, instead, they provide energy and inspiration to leave behind passivity to favor engagement with the social struggle of those we aim to understand as researchers.

Opposite to the idea of the university as an ivory tower, where the production of knowledge is somehow separated or disconnected from society, corazonar entitles a way of being-with members of society through reciprocity, sharing and communion.  Also understood as a form of self-learning, I appreciate the act of corazonar in this research as an openness to nourish academia through the dialogue with diverse voices. Departing from a sense of humbleness, I aim to co-create knowledge with refugees and engaged scholars not only as a matter of academic merit, but also as an expression of solidarity where I ‘move along with my heart’ for a more inclusive and just South Africa for all.

Santos, B. de S. (2018). The End of the Cognitive Empire: The Coming of Age of Epistemologies of the South. Duke University Press.